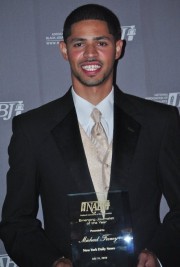 Michael J. Feeney, former President of the New York Association of Black Journalist, caught as many dreams as a spider web would allow within 32 years of celebrating yearly milestones. In his last four days of life, Mr. Feeney treasured his many walks of life by tweeting this intimate thought - "What's The Good News About Libra's!" To accommodate the outpouring support on Social Media for Michael's outstanding leadership during 2011-2015, two funeral services will be held.

Michael J. Feeney, former Alpha Omega, and a graduate of the University of Delaware was a worldwide member, advocate, and supporter of the established 1975 organization, National Association of Black Journalist.  Mr. Feeney broadcasted his dream to the public on Social Media as an invitation to become intimate with him to provide career development as an Educational Journalist Leader to motivate upcoming stars.  Mr. Feeney's mother was always the center of his universe that provided thought-provoking energy within his conversations to new journalist to never forget to capture that shot (photo op).

Mr. Feeney's untimely death caused major devastation within the Black community.   His thoughts on Twitter were earmarked for the next journalist to make an inquiry about his identity and what future directions the Black community journalist or leaders must take to make an impact on Black health, the environment, nutrition, and  what role the weather plays to increase one's intelligence as it applies to bringing personal power.

Yesterday, Michael J. Feeney was set free just before Black History Month, and his journey or lives will be celebrated under the methodologies through writings of voices from other leaders and participants using their practices and beliefs.  The goals for the Family and Friends of Michael J. Feeney is to remember why his Memorial Fund is an observation into the conditions of who we are tomorrow.

The Family of the Award-Winning Journalist, Michael J. Feeney has requested a celebration of his 32-years of life be shared below:

Information from the family:

To accommodate the outpouring of love and support for Michael, we will host funeral services in Harlem, NY and Englewood, NJ. Harlem, NY Homegoing

Street parking is available and early arrival is highly suggested.