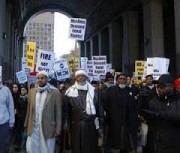 Guidelines to amend New York City's continued commitment to keeping the City safe has been announced as part of a settlement of lawsuits accusing the NYPD of improperly investigating Muslim groups. The City never admitted to engaging in any improper practices, but changes and efforts to provide more detail into NYPD personnel within the existing Handschu Guidelines will be addressed.

New York -- The Handschu agreement is a set of guidelines which regulates how New York City police officers behavior should be monitored about political activity.  In the past, a Handschu agreement was a Federal opinion from Barabara HANDSCHU  vs. Special Services Division, which sought to modify how political activists were interrogated following an arrest governing a city police department's investigation.  The Federal Civil Procedure for court's orders, judgments, and decrees will not only serve to punish conduct, but also it will service to discipline and to deter threats of an investigators' alleged pattern of unconstitutional conduct.

Under the New York City's personnel existing Handschu Guidelines, new changes will represent efforts to incorporate police policies against religious profiling, by adding a provision for considering the impact investigations will have on people that are not targeted.  The plan is to establish reasonable time limits for individual studies and adding a civilian member to an internal NYPD Handschu Committee.  Also, as part of this settlement, the NYPD will agree to remove the 2007 report "Radicalization in the West," which the NYPD does not and never will reply upon to open or extend investigations.

Mayor Bill de Blasio stated, "We are committed to strengthening the relationship between our administration and communities of faith so that residents of every background feel respected and protected."  "New York City's Muslim residents are strong partners in the fight against terrorism, and this settlement represents another important step toward building our relationship with the Muslim community.  Our city's counter-terrorism forces are the best in the world, and the NYPD will continue working tirelessly to keep our city safe in the fight against terror while respecting our residents' constitutional rights."

“This is the latest step in the continuing efforts to build and maintain trust within the City's Muslim community and with all New Yorkers,” said Police Commissioner William J. Bratton. “The Handschu Consent Decree has long represented a clear set of rules for conducting investigations into certain unlawful activity. Incorporating existing NYPD practices into the Handschu Guidelines makes it easier to maintain best practices in intelligence gathering and investigations. The modifications also bring the guidelines closer in line with FBI practices, which is helpful in working collaboratively with our federal partners. The addition of a civilian member to the Handschu Committee is also a key part of the settlement, as it will increase trust in the Handschu process."

"The proposed settlement does not weaken the NYPD's ability to fulfill its steadfast commitment to investigate and prevent terrorist activity in New York City," said Deputy Commissioner of Intelligence and Counterterrorism John J. Miller. "The terms of the proposed settlement, which are the result of extensive and thoughtful conversations between representatives of both parties and NYPD leadership, include the incorporation of long standing best and sound NYPD practices into the Handschu Guidelines, which were last modified in 2003."

“Under this settlement, the NYPD agrees to institutionalize the investigative practices it has developed over the years to enhance its capacity to identify adequately terroristic threats to this City’s safety and security without stereotyping an entire community based on religion,” said Corporation Counsel Zachary W. Carter. “The NYPD’s Intelligence Bureau has led the effort to bring resolution to this matter, and New Yorkers can be confident that this agreement does nothing to compromise the safety and security of this City.”

According to the de Blasio administration, Deputy Commissioner Miller will retain sole authority over all intelligence investigations and decisions.  The NYPD will formalize an existing NYPD advisory committee that Deputy Commissioner will consult during open, extended, and closed investigations.  The Mayor will also expand an independent civilian representative to hold consultations with the Police Commissioner.  The additional voices will increase transparency, according to the press release, while maintaining the confidentiality of investigations.  The civilian representative must be an independent attorney, pass City, and Federal government background checks, and be legally bound by the confidentiality order.

The City will hold a Court fairness hearing on these guideline changes in the upcoming months.